You are here: News Microplastic particles can enter our lungs and blood

For the first time, plastic particles have been detected in human lungs of living people. In healthy lung tissue of 11 out of 13 patients microplastics were found, most common were polypropylene and PET. Read about it in The Guardian. One month ago, plastic particles were found in human blood for the first time, as published in Environment International. This is shocking news.

The plastic we encounter in everyday life can make its way into our body and travel to critical organs.

Yet, we still know relatively little about the risk these particles pose to human health, mainly because the methodology to accurately measure microplastics in the human (or animal) body was not available. Scientists from the VU have now developed a new method that makes it possible to detect minuscule amounts of tiny plastic particles in human blood.

As we eat, drink and inhale, essential nutrients are absorbed and enter the bloodstream. Blood makes up 6-7% of body weight in humans and as it flows through the body, it provides organs with oxygen, nutrients and potentially also plastic particles.

The researchers tested the blood of 22 anonymous donors for the presence of 5 types of plastic that are commonly used for food storage, textiles and a wide range of other products humans come into daily contact with. 77% of the donors did indeed have microplastics in their blood. PET, Polystyrene, and Polyethylene were the most widely encountered and some donors even had three different polymer types in their blood. This means that at least some of the plastic particles humans come in contact with can become available to critical organs like the placenta, brain or kidneys via the bloodstream.

These results are very disconcerting. The need to assess the associated hazard of such exposure has become even more urgent. Do the particles accumulate? What are the long-term effects of these particles in our bodies? How do the particles interfere with our immune regulation or how does that affect the predisposition to diseases with an immunological base? This requires large-scale external exposure studies to find out.

With the new technique, there is no excuse to postpone such studies.

How damaging is breathing in microplastics?

The first evidence of health risks from micro and nano plastics

The future of the refillable bottle is promising 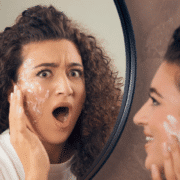